Binod Baral was born in Pokhara in Nepal, a popular tourist destination known for its beautiful nature. Surrounded by greenery and a maternal family that loved to cook, he grew up in a healthy and happy environment. His maternal family runs successful hotels in Nepal, the oldest one was established about 40 years ago. Binod is one of the UK’s most respected and proven talented chef from the Nepalese community. He has more than two decades of global experience in food industries in various operations. Passionate about food and hospitality from a very young age.

He arrived in London in 1999 and joined Zarani Haute Cuisine, Kew Garden. Promoted as Head Chef at the age of 21. In 2001, he joined Tamarind Michelin Restaurant, Mayfair as Head Chef of Okra Team. In Early 2002, joined Delhi Deli as a Head Chef with a vision to develop a new brand of takeaway Indian outlets that deliver superb food in an entertaining and stylish manner.

In 2003, he became the youngest Group Executive Head Chef of The Bombay Bicycle Club which was then a  part of Clapham House Group. In 2010 joined Global Head Chef (Asian Cuisine) for DO & CO International. Responsible for catering of 68 International and National Airlines, Formula 1 Race, Chelsea Flower Show, and Champion league Final.

Co-Founder, Director & Chef Patron at MoMo & Roti, West London (Nepalese restaurant without Tandoor in kitchen and tikka masala & korma on menu) and Zumbura, Clapham (an extension on Mum’s Indian Kitchen). Co-Founder at Global Nepalese Chefs Forum. Culinary Director at the Black Lemon Plant Base Catering along with many other projects and Founder of I’m The Chef group.

Binod believes in ’Local for local’ want to give business to local and take business from local, support local farm and business so it will reduce farm to fork time so food automatically fresh and economical, reduce packaging and delivering cost and food automatically fresh. Environmental Sustainability is another principle priority. He believes in practical action and starts from individual person him to create a sustainable future for everyone on our planet to achieve this sharing knowledge is key from ground level. Connecting People to Nature – “in the city and on the land, from the poles to the equator”. He believes in caring mother nature and making our world better. Source- Different websites 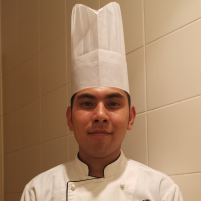